Margaret River Woodfired Bread is a model citizen for Local-Is-More: connected to heaps of local businesses and community members, striving for sustainability, and brimming with authenticity.  The bakery runs on the “country German bakehouse” philosophy, specialising in just a few types of bread, with a strong emphasis on relationships with the community, and the art of hand-crafted breads powered  by a living fire.

With a shirt covered in flour and a welcoming grin Santana shows off the hand-crafted ovens at the heart of Margaret River Woodfired Bread.  The three giant ovens get lit each morning, running off a single wheelbarrow of wood per oven per day.  Santana takes a peek inside the main dome where some fruit loaves are browning off, and points out the 18 and half tonnes of basalt sitting on top of it – “That was a big day’s work putting that up there!”.  The basalt stays hot all the time, Santana explains, “When I’m teaching the ovens I say it works like a blanket.  You drop the doors and the heat drops and lift the doors and the heat lifts – you’ve got to control it, almost like a puppet master pulling on the strings.” 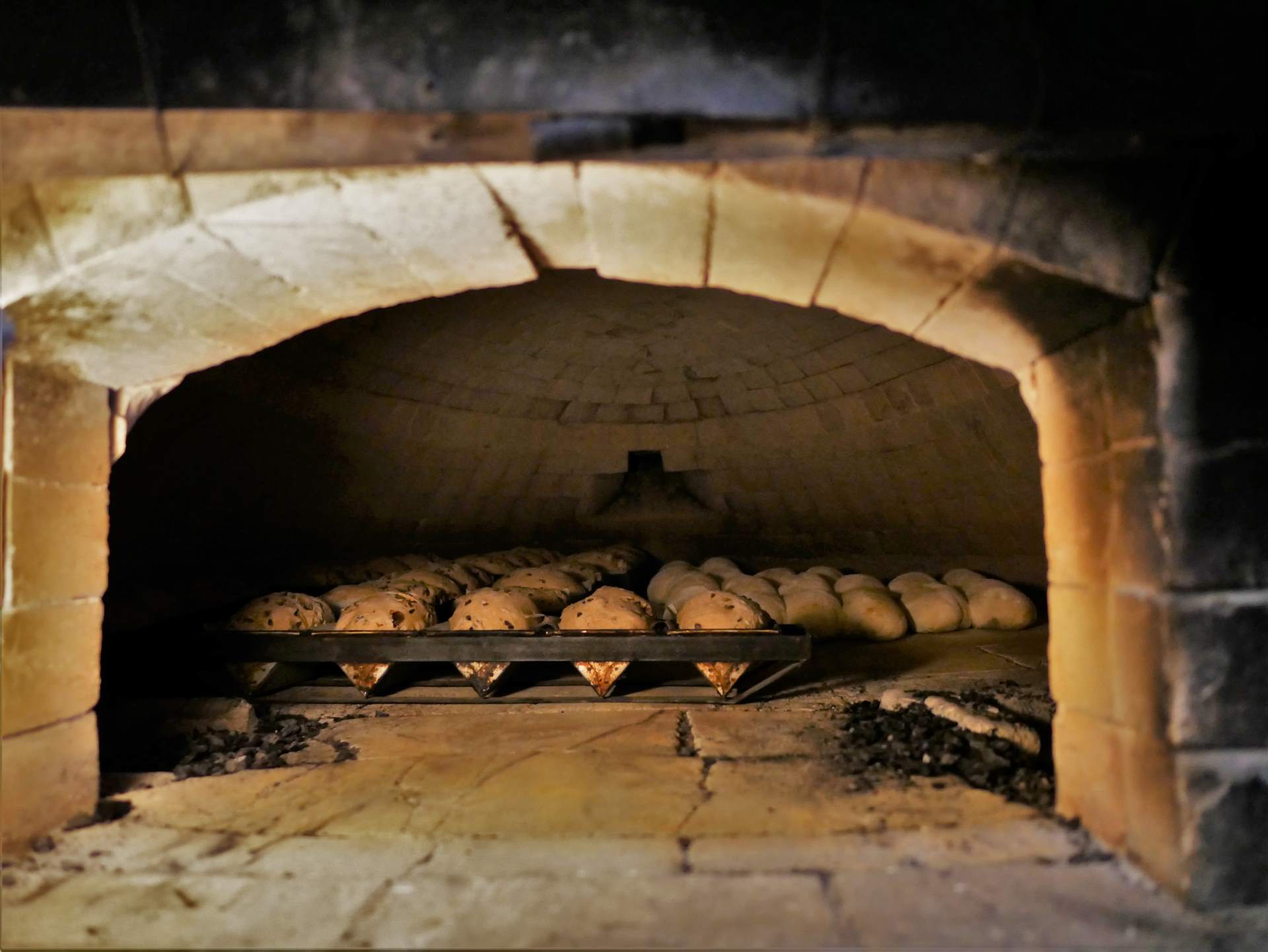 With the reflection of hot embers in his eyes, Santana remarks “Every day is a challenge when you’re dealing with fire, where one piece of wood can change your whole day.  Pulling the fire out and then baking in the oven – there are no temperature gauges, no timers, no nothing, it’s all by feel. So to get a consistent product it takes a lot of experience, and you’ve really go to be on your game.  And we’re all pyros – we’re all pyromaniacs, don’t worry about that! These guys are all the kids that poked fires with sticks and couldn’t leave a fire alone!”

But it was actually the water that drew Santana to the fire: growing up in Margaret River, he fell into it because of surfing. “I wanted a job flexible enough that I could still go surfing and that’s how I became a baker.”

After an apprenticeship at the bottom bakery, and then working in Augusta, he got offered a job at Yallingup Woodfired Bread and became head baker for 10 years. Under the guidance of Gothard, the German character behind the well-loved Yallingup bakehouse , he learnt the art of wood-fired sourdough baking.  After living in Yallingup for ten years Santana wanted to come home, back to his favourite breaks at Ellensbrook and closer to Margaret River.  So in partnership with Gothard he launched the Margaret River branch of the woodfired bakery.  It shares the same logo as Yals, and practices the same business philosophy: Every ingredient is certified organic, and as local as possible, and the bakery operates as sustainably as possible.  “We use biodynamic flour from Eden Valley in Dumbleyung, power the ovens off wood offcuts from the Nannup mill, use Lake Deborah salt from Southern Cross, and add rainwater”.

There is a lot of history wrapped up in the bakery, from the 40,000 year old lake salt added to each loaf, to the beginnings of Gothard’s grandfather’s bakehouse lineage in post WWII Germany, to the young apprentice, Sammy, and the junior staff coming on board today.   One of the fascinating pieces of history is the ferment cultures themselves, the driving force that causes each loaf to rise and lends the characteristic slightly-sour flavour.  Rather than relying on added yeast, sourdough breads use a fermented culture of natural yeast and lactobacilli bacteria – a culture that is fed and maintained every day.  Santana shows off the two cultures he uses in his breads, each stored in a clay “sourpot” made by local potter Mat Griffiths.  The Rye culture has been going for 17 years, and is the same culture used at the Yallingup bakery.  The white culture is much older.  “A baker never gives away his culture – it’s like one of your children, you’d never sell it.  But you can swap it for something worthy, monetary gain is not good enough”.  Santana came into possession of the white culture by making a swap with a friend’s bakery in Melbourne, which originally brought it to Australia on a plane 30 years ago from a famous (undisclosed) bakery in San Francisco.

This rich history, these stories, imbue each loaf of bread with a refreshing realness in today’s mass-production economy.  Santana points out that unlike mass-produced bread, his loaves are free of chemical additives.   “You don’t really need all that stuff.  You only need it if you’re pushing it through fast and trying to make every loaf exactly the same…a lot of commercial loaves are three days old by the time they hit the supermarket shelves, and they’re still soft as!  But the simpler the better – you only need time and patience to make a good loaf.”  Buying local means not only less chemicals, but less transport emissions, and bread is just the start of the local produce available. “You have a look around and there’s a lot of people in Margaret River doing a lot of good stuff”. 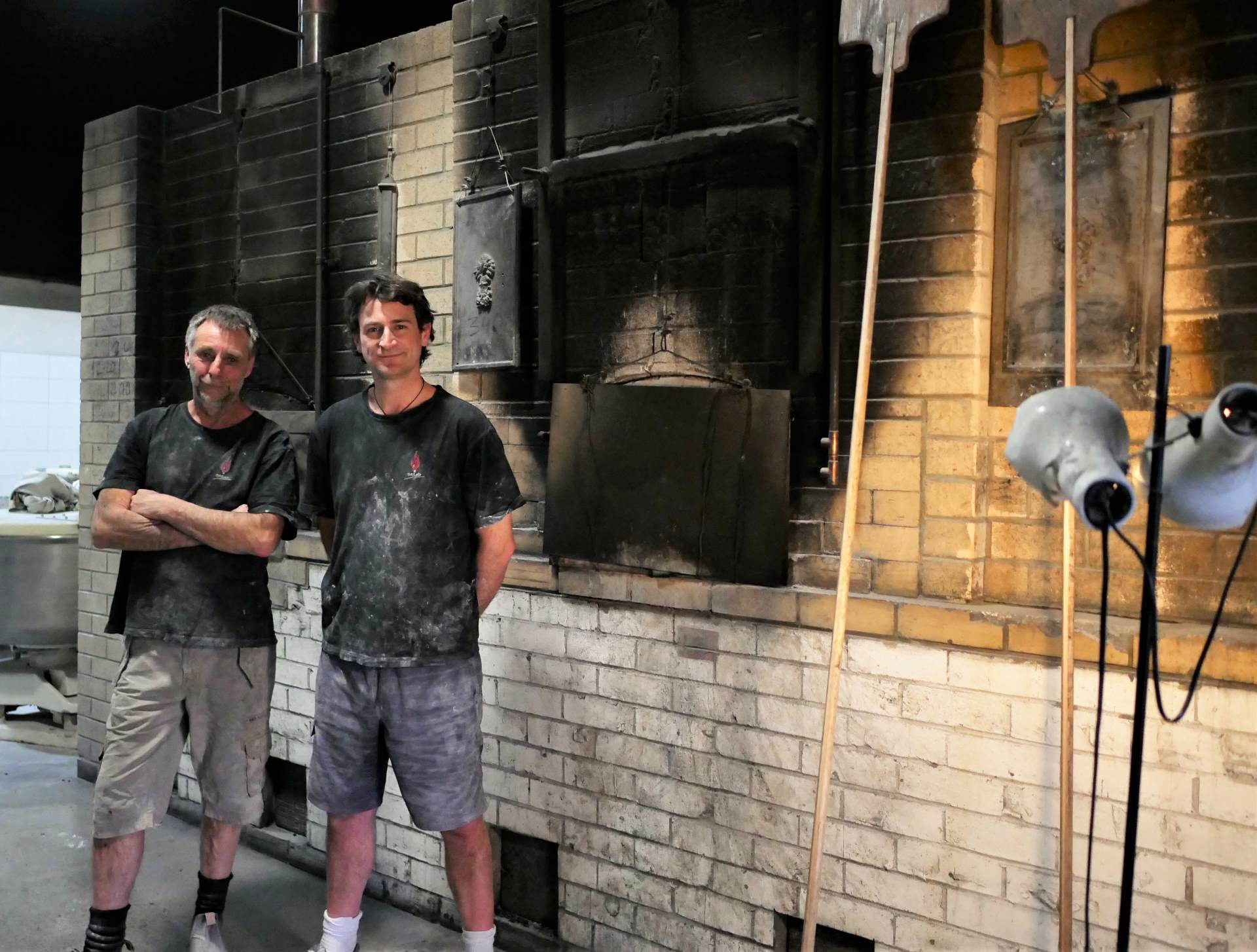 14th August marks five years since Margaret River Woodfired Bread launched, and the volume of bread has ramped up over the years to roughly 750 loaves of bread per day.  These loaves include different styles – the “Field”, “Wave”, and “Boodji”, which die-hard fans of the bakery will be familiar with.  But even if you’re not that familiar with these cryptic terms you have probably unknowingly eaten the bread at one of the many local cafes and restaurants that stock it.  Actually, wholesale is the backbone of the business, and Santana and the other bakers spend plenty of time in a delivery van sending loaves to Cowaramup, Margaret River, and Augusta.  Erupting from the delivery vehicle in a cloud of flour the baker will personally cart the loaves into each shop, a deliberate effort to connect the bakers themselves with their customers.  A baker’s life is a long day, so this commitment to getting out and about in the community is a telling display of how Margaret River Wood-fired Bread embodies the German bakehouse philosophy of being a strong part of the community fabric.

If you are wanting to buy a loaf you can drop in to the bakery on Boodjidup Rd, Margaret River, from Monday afternoon through to Saturday afternoon, or buy it directly from Santana’s wife Cherie at the Margaret River Farmers’ Market each Saturday.  Their bread is also available in a range of local shops, including The Garden Basket, Blue Ginger, Better Choice, Riverfresh IGA, Bay Store, Black Sheep, Gourmet Merchant, and Deckchair cafe.

Every day is a challenge when you’re dealing with fire, where one piece of wood can change your whole day.

for taking the Local-Is-More pledge! 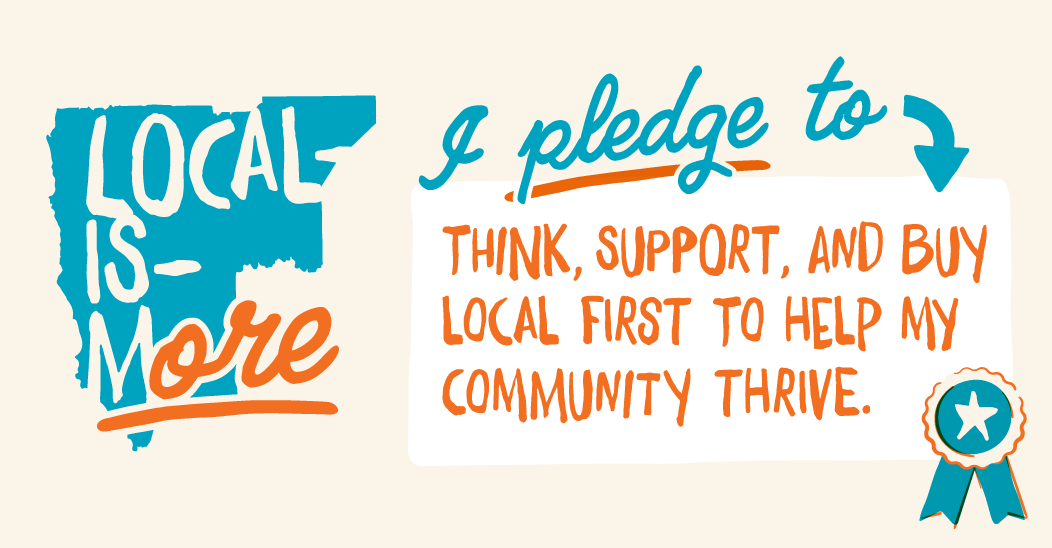